I am fine; thanks to God. I believe you are good too. Thanks for your letter, I got it. Of a truth, I was surprised to hear from you, after you shunned me completely. I agree we’d have celebrated a year of our relationship, if we were still together.

I do not know how to start this letter I write to you, but I scribble words together to give you my reply.

Kevin, you know you didn’t notify me of your visit to Ireland. I know it’s because we went separate ways, even though I didn’t want it. I had to go to your office since you refused to pick my calls and reply to my texts that very day you told me to leave your life. All night, I cried a river and asked Drake, my younger brother, to call you with his line. You didn’t pick his too.

I hope you remember I told you about my mom the day we went to the boutique to get my gown? I told you she was in need of another inhaler, as the one she was using was almost finished. You know I’d not have bothered you, if I had been paid for the month. But I needed not to risk anything because she’s all my brother and I had. You know I lost my dad four months before we started dating, and your presence wiped away my tears in a very short time. Remember I told you about Peter, my ex-lover who left me without telling me of his whereabouts. Your presence healed my wounds, but unfortunately, your absence opened up the wounds again, even in a more painful way.

The night I told mom about what had happened between us, shock gripped her and she started to brood. I tried to calm her down because she was hypertensive. I helped her to bed; she couldn’t sleep. My heart raced faster as I asked my brother if her inhaler was not finished. He said it was finished. I couldn’t sleep and started to call your line and message you, but there was no response.

In the morning, I rushed down to your place of work, but I was told you didn’t want to see anyone, not even me. I had come to seek your assistance so I could get a ventolin inhaler for mom. I called you right outside your office, but you cut my call. I was about to call Drake if he had gotten another means to get cash when his call came in. I picked his call and was told mom’s breathing wasn’t normal. I knew she needed the inhaler. I burst into tears as I roamed about seeking help from passers-by and calling my friends, but I found no help. I had to rush home. I rushed home to find mom’s body lying cold on her bed. I screamed with deep sadness until I passed out.

That happened and I still called you, but you didn’t pick. I fell ill and was admitted at the hospital for three weeks. I was starting to have mental disorder. Drake told me I was calling your name, crying and laughing at the same time. He also told me that the doctor said that I’d be fine, if only you could show up. Drake told me that as he was heading to your office, you drove past him. He ran after your car, but you were out of reach. He called you immediately, but you cut the call. Kevin, why?!

Well, I am grateful to God for how He healed me completely. Peter, whom I knew not his whereabouts, showed up at the hospital. He had come to greet a sick friend of his when he bumped into Drake. He asked Drake what he was doing there, and he told him I was in the hospital. At the sight of Peter, I recovered. I do not think I need write you the reasons why he was not around before I met you. It is not necessary.

Kevin, until you went to Ireland, did you remember how important I was to you? Only God knows what really I did to deserve an embarrassment—a public one. Only God knows why you refused to pick my calls, why you refused to reply to my messages. You made me look like a rag. Do you know I returned to work one morning, only to get a sack letter? I was sacked because the management thought I suffered from mental disorder.

Anyway, my introduction ceremony was held last week, and I will be getting married soon. I love the man in charge now, and will always do. I hope what happened between us makes many other lovers understand that a misunderstanding shouldn’t be let to live for long, else, the unexpected happens.

Thank you for everything you did for me. Thank you for the lessons learnt. May God give you your heartthrob soon—the one who would sing with her honey-like voice to sweeten your soul. 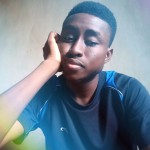 While We Were Making Out…