“You aren’t trained to be a human… You’re just a machine… a killer. Emotions make you weak, so sever them. Unless they’re weapons don’t use them!”

“Too slow! Nobody will give you seven seconds to assemble a gun. You have to make the impossible happen! Make it happen in four seconds!”

“Anicca, nobody gives second chances. You either kill in ten seconds or die in them.”

A young maiden turns around and points her gun and pulls the trigger. She watches the blood pool and then walks off. Her eyes seem dark and empty.

“Anicca… that’s the name he gave me along with my nature. I was born of him… Zeus… a demon just like I am… trained to be better than an assassin… better than the gun itself. I’m not a machine…. I’m but a lethal weapon… the true… son of death.” 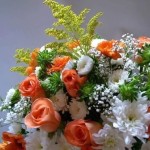 Zombies of the Apocalypse