I would do anything to have him back, the much more we could have done, the much more we could have been. Or maybe it’s true we don’t know what we are missing until it comes through, because before him I didn’t know my smiles were the petals of his heart. Life was a bed of roses, only I imagined long was going to last till forever. So I held his hands till whenever. I loved him long before, when the only notes he made were those of the guitar, and I didn’t mind. I was confident that one day they would reflect in his wallet and even when we fought over relationship stuff, I would ask for space and he’d buy me a rocket. But that was then. That was before I severed his trust but in turn he took my trust, crumbled it into ash and watched it blown away.

Day one was when I enquired of the lipstick at the shoulders of his shirt. He gave me a slap. I took his wrist. He stopped. A dumb move. I let him go. I listened as he banged the bedroom door. The sound now hitting me with every drop of reality. Just six metres away, yet I felt that he was completely gone. Deep, and he carried my soul along.

Day two was when I woke up with a bruised face, thanks to yester-night’s punch. I put on heavy make up to conceal the broken fragments of pieces of him that showed in my eyes; and I had to carry them because he was worth the weight. Wait, the pain was real. Gaping and hollow, some pain that took all my breath away.

Day three was when I turned to his side of the bed only to find him on his phone. While he had late night conversations with his new catch, my pillow was soaked with tears. Somehow, crying was the only way I let my heart speak when my lips could not explain my pain.

Day four was when I went to see the physician to get rid of the being in my womb, the seed he’d planted when our love showered us with rain. I let out a whisper, lost in my rage and the wind. In fact, I was never pregnant. I saw the world crumbling on my feet when the physician explained that due to post ovarian failure, I was never going to have a child of my own.

Day five, I realized it always rains the hardest to people who deserve the sun. He never showed up the whole night. At least not when I demanded to know what the ARV pills were doing in his safe. Somehow the night turned to nightmares without him. One thing that was clear was he had gone for good and left me only one thing—depression.

Day six, I broke the mirrors just to shatter the images I saw of me. I felt small, but so were the stars from a distance. I resolved to clean up the wounds he left on my soul. They healed, somehow, but left scars of him. I stopped telling myself everything was going to be okay when I already knew how it was going to end.

Day seven, I saw you with him at the mall. I am not jealous he is with you. I’m just jealous he is happy without me. These are actually not about my insecurities, these are his securities with the future. So he had to ditch me because you had an ability I don’t have. So I am able to forgive him for inflicting me with the virus but he couldn’t take it never to be a father.

To you, the random girl that fell for my ex two days after we broke up, how I hope you’ll never going to be the wrong shoe for his feet. How I hope he smiles despite the fact that my soul bleeds for him. I was the diamond that took in all the pain of friction for polish, but it was his choice to settle for stones. 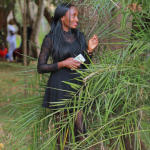 I Shot A Flower