How Mum manages to sing with a flawless soprano in church still remains a wonder. Dad would make melodious tunes out of the piano too and the congregation would move or sway depending on how moved they are.

At home, when Dad and Mum release their tunes, I sway and move down the street of depression. Dad would raise his voice using Key F and Mum would raise hers to kill Dad’s voice using Key A—none would want to listen to the other and eventually, they sing a song that can’t even pass as a dirge.

The day I got to know that beats exist out of music was when Dad raised my drumsticks and it landed straight on Mum’s naked skin. I couldn’t say if it was reggae or funk he made but with Mum’s voice having pain as its underlying, the tune swore at my ears.

Then, the last straw broke the camel’s back—the picture of Mum in my head for that day still remains that of a rat ensnared. Dad beat Mum like a drummer would beat his snares using different strokes. I could only look on like a bewildered audience would look at its hyperactive performer.

Our home is a concert of broken songs. Dad beats Mum like a drum. Once, her skin became torn, another time, it became taut. I was once an untuned guitar, Dad made me so—I managed to make sounds but they were always conflicting. Now, my strings are broken, I make no sounds. I prefer solitude, keeping to myself. Our dog is the microphone, it blares, calling people’s attention to the disarray happening inside but how many people can decipher its message?

In church, we make a concerto but at home, we are nothing but a cacophony. 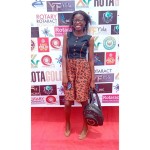 The Flames of Passion