She fell upon the dead bodies strewn across the battleground, breathing heavily. The thought in her mind was that she wasn’t going to push forth the babe in her in the midst of scattered organs and battered heads. Stricken with labour pains, she grabbed her sword as she crawled admist the gory sight towards the forest.

An enemy soldier appeared, wanting to kill her, but the deathly glare she gave him made him pause. Instead he gave her a steady arm to clench on, and together they wobbled to the edge of the forest.

She was losing blood but she was sure that she was not losing losing child. Gritting her teeth, she handed the soldier her knife, and removed the rudely carved armour protecting her swollen belly. With an unspoken word she asked the soldier to slice her open and take the babe. Clamping her teeth down on a piece of wood, she shut her eyes as she felt the piercing pain of the knife slicing her open.

As she felt the arms of darkness beginning to embrace her, she heard the most wonderful cry of her child. She whispered, “his name is Abungu.”

Smiling, she knew he would be properly cared for by the soldier. Her vision had shown her. The forest stood still as she took her last breath. 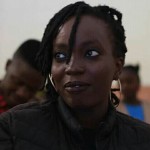