Smarty’s side
Gripping his laptop tightly, he closed his eyes waiting for the reply
His client has been following smoothly or rather sheepishly
Call him client or mugu, your choice
For months, he has carefully planned out the operation
Using every trick he’s got in his hat
Now, he has come too close to be so far

Inspector Frank’s Side
Gripping his gun tightly, he closed eye waiting for the reply
As he starred at the monitor in his office
For years, he has been tracking them cyber criminals
Using every skill he got in the box
Now he has come so far to be too close

I look at the young seeds of men groping in the cyberspace
Give me a white hat! Everybody wants to be a hacker
The whites made our fathers slaves, let’s make them our maga… folly in the voice of the criminals
A cry in the wilderness of social media: Stop Yahooism
Phishing, spoofing, spamming, hacking, keylogging, what-says-who
Am I a yahoo boy? No!

Smarty’s side
Finally it came, the reply, then the alert
He dropped the laptop in ecstasy, shouting out his lungs, 5000 dollars.
He feels it pays to be a yahoo boy, his next operation already brewing in his head

Inspector Frank’s Side
Finally it came, the reply, then the alert
Quickly it was traced to Smarty’s IP address
He rushed out with his men, going for the kill
Another yahoo boy have been caught, one of the many to follow
A raise in his salary, promotion and 5% of the yahoo boy’s gain was not his motivation.
It was to protect the cyberspace
To stop yahooism 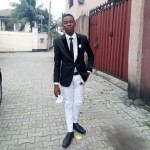 Why Be A Cultist?

Dear Xeno, It’s Me Your Brother