There was a screeching sound that shook the rooftops of Chinyere’s house. A moment of suspension—no, anticipation followed. The atmosphere was stiffened like a bowel of oil in harmattan. It seemed like everyone expected it, looked forward to it even.

The only decipherable sound in the deafening silence was the rat-ta-ta sound of Okuruogwo’s staff in the inner room. People were forbidden from venturing to where she was attended to by the medicine man.

Every one who had come to brandish faces laden with sympathy, sat randomly outside, in doleful silence, waiting, as if to say that they had merely come to ensure her death was certain before they left; to share the goodnews—for that was what people relished most in sharing tales of who had died and how they had died.

Mama was engulfed in a serious conversation with Da Akuwueze, with her back turned toward me, fingers dug into ribs; clearly they spoke in whispers, loud enough for just their four ears.

Chinyere had started whimpering now, as if to call back my wandering thoughts. I sat nimbly beside her, willing words other than the ones I had being wanting to let out to come.

She was the closest person I had to a sister. We grew up together, loving each other, yet too afraid to admit our fears.

The subtle tale-tell signs of love masked on our faces; each time we were together, notwithstanding the fact we pretended we just cared too much for each other. That’s all. We told and retold ourselves, in lame conviction. For that way, we had conquered our fear. But in that rare moment of unguarded moments we randomly locked lips to cheeks.

I loved Chinyere’s, yet I hated her for making me to. It wasn’t that our love wasn’t strong enough to survive our imminent breakup—a nightmare I had nursed for nights—with no one to voice it to.

I dreaded what will become of my wretched life if Chinyere left me. I will probably end what remains of it; and all that remains of my mother’s.

As Okuruogwu’s approaching footsteps, with its peculiar poise and artful recital of incantations began, the dreadful suspense that hung in the atmosphere grew sharp enough to cut through a stone. Papa Chinyere stood up first, peering into his face, as though all he needed to hear was engraved there. The medicineman wore a non-commital look that worsened the poor man’s agony.

His anxiety pervaded ours too. And accentuated it, in the stretched necks from behind straining to catch every word the dibia said, as though their lives depended on it.

As I looked on, I saw my mummy’s cheek stained-dotted with marks of tears escaping into her loosely tied wrapper across her chest. She tied and retied the wrapper in feigned attempts of worry

“Onyewuchi, ihe gburu nwunye gị nọ gị nso,” the medicine man offered, cringing as though he read my eyes that began searching my mother’s.
Everyone hurriedly let him pass, as though a face to face with him will reveal the secrets buried beneath that façade. As his footsteps rescinded, Dee Onyewuchi, sauntered into the inner room, followed by Chinyere, with everyone else behind. We circumvented Daa Onuekwuzurumma’s death bed.

There she lay accusingly at us. Chinyere had now started sobbing; I made to hold her to my side, to tell her not in words but in touch, that the witch who killed her mother last night was right here.

Words failed me. I left the group and stomped home, to prepare what would later be a double funeral for both our mothers.

That night I strangled my mother to death. She needed to apologize to my Chinyere, she owed Chinyere that, but better paid to her mother, in death— where both the offender and the offended would be wrapped in a warm embrace afterwards, if they ever reconciled—but in the land of the dead.

Mother killed her mother that night.
I saw her change into her body that laid lifeless for hours that morning, when I barged into her too to fill her water pot for the day.

Days before, I had seen above her fireplace in the kitchen, a wooden object tied together with a sample of a wrapper I had seen Chinyere wear to the stream countless times.

I lived a lifetime without her, atoning for my mother’s sins to her. Her mother’s death drove daughter and father to a neighboring clan, as they couldn’t bear to know that the reason for their pain is her happiness. While mother suffered her curse in the land of the dead. That I was certain.
I, mine, here. Alone. For I was part of the conspiracy. I couldn’t tell her.

How could I, when it was me who implored mother to ‘take care’ of Daa Onuekwuzurumma, for me so Chinyere and I can be together forever? 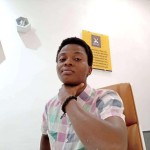 The Stars Don’t Tell Our Fate