I thought I knew enough about VIP sections, until I got into college. I had changed school to another which was in the same state my parents resided. It was a tough decision leaving my friends from my former school to a new one, but mother had convinced me that the change would be worth it.

Like expected, the feeling that comes with getting into senior school was all over me from the moment I stepped into the school compound. My mother had held me by my hands like a child as we walked to a particular spot, not minding that I was grown with full breasts and all curves. My big skirt swayed from side to side while my shirt remained tucked into it. Baba Ariwa, the taxi driver that brought us, remained seated in the car and waited for my mother to beckon on him to bring my luggage.

There at that spot, I was allocated a class and a hostel. SS1G and Pink hostel precisely. It was after the allocation that I was allowed to move my belongings across, towards the supposed new hostel. I wondered the kind of classmates to expect more than I thought about my new hostelmates. This was because I would probably be spending more time in the classroom than at the hostel. Surprisingly, it appeared my classmates were carefully picked. A mix of quiet, noisy and crazy kind of girls. I could be termed quiet to an extent though I was still wild at thoughts. I studied daily and prayed fervently too. Prayers and masses were not held daily like it was done in my former school but I still rose each day and retired each night like I had such activities to tend to. I had to be serious with everything. I never joked with preps either.

Besides studying, copying notes and sleeping at night preps, there was one other thing my classmates usually did which I just discovered in my new school. This discovery was about a visit to some place, somewhere they visited from time to time. I’d never gone with them before, until this Friday night. This night, a girl named Imelda and a group of others had led the visit to the VIP. Imelda was the labour prefect and the noisiest in the class too. She had earlier announced that she needed people to visit the VIP section with her, this caused a slight outburst among us like expected. More like excitements. I watched the little uproar in the class and the actions that followed. I watched as almost everyone began to tear three to four sheets of papers from their long notes. Literally half of the class were tearing and folding and running alongside Imelda. I somehow had to oblige. I shouldn’t be the only one in the class for the next twenty to thirty minutes that they would be away.

Reluctantly, I tore just two sheets from my note. I shouldn’t be wasting papers on missions I had little knowledge of. So, I took just the two and ran along with them. We jogged in our group, past the classrooms, past this old building that was entirely dark, and into a particular area that was equally dead in silence. It was just we girls that filled the place. The smell from this area explained things better. The visible white papers were a confirmatory. I grinned. Imelda the poo leader was the first to undress, she laid the sheet of paper on the ground and squatted to do her thing. The haste with which she did that got me wondering again. I thought it was right to defecate in this place from the start, why was she hurrying like someone was going to catch us? Moreover the hostel toilets were never washed.

As expected, everyone else followed suit in the same speed and soon I could hear constant fart sounds and shrieking and squeezing of faces. Before I knew it, fresh poo smell had filled the place. I was still standing there with my paper in my hands, doing nothing. I thought of going back but I remembered I hadn’t tried going potty for the first time in the overhyped VIP of the college. So, I just bent over and undressed as well. I spread one sheet on the ground and carefully rumpled the other for my wiping-after. Guys, the breeze brushed over my bum cheeks. I have never felt that way in ages. My face lit in excitement as I graciously released the soft stool that needed to get free. Why hadn’t I tried this all the while? I’d been doing this in a messed up toilet where one has to jump several mounds of faeces before eventually getting in. Waste of time and poo, I thought. While this was going on in my mind, a few girls were already standing and waiting for the rest of us that were still squatted.

Since childhood, I’m not sure if I have ever run out of luck until that poonight. I’d seen a bright light shining towards our direction from a distance but I wasn’t sure who it was. I was still trying to decipher who could be pointing such bright light in a place where grown girls were doing their thing. I was probably vexing within me. This person could have seen that the people there should be pants down and at least respect us for it. But no, the light only got closer.

Before I could tell it, the other girls including Imelda had scampered to safety, leaving me and this other plump girl. Like, business wasn’t over yet, I hadn’t even cleaned so there was no way I could have stood to run with the others. Eventually, the light bearer arrived and it was the school security.

“So na you they shit shit for here, bah? Everyday white paper with fat fat shit go full here ,bah?” He held me by my left hand and continued to rant and accuse me.

“Sir, this is my first time,” I managed to say.

Meanwhile, the plump girl I was with had escaped to safety. I was alone, I was the sacrificial lamb.

“If I slap you like this, no be only you I see for here?”

“They all ran out, sir,” I pleaded in tears.

This time, I had managed to drag my underpants on with one hand even without cleaning myself up.
This man dragged me roughly like a thief and locked me in a small dark room situated far from the hostels. He promised me I would spend the night there and I did sit there all night. I was up throughout, and sat there into the morning. I thought about my entire life that night. What really inspired me to poo at the VIP? I wasn’t sure.

Very early in the morning, he set me free and tasked me to catch anyone that goes to poo in that area. I had learnt the hard way that, one should never go to a VIP section without asking any questions. The ‘P’ was not actually a person after all, it was a place. A special poo place in my school where the wild alone trod. 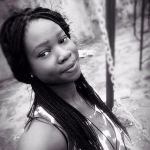 A Taste of Africa

“My Loving but Cheating Husband” — A Short Story by Tobe Davis