There were three of us on the bed in our hostel room that evening—Amara who held her phone to her ear as she talked to Mummy with her eyes glistening with unshed tears, me beside her, clutching and unclutching the pillow I held to my chest, and the elephant in the room, an envelope that lay in the space between my older sister and I.

The envelope was small, dark brown and had the words “School Fees” written in Daddy’s bold, loopy script on the front. On its back was the cross-like stain where it had been hurriedly blessed with anointing oil, and inside it, where there should have been one hundred and twenty thousand naira in crisp one thousand naira notes, there was only the name of a church stamped in purple ink—Able God Evangelical Ministries.

I could vaguely place the name as the church Amara and I had been invited to a week ago. We were walking home from school when a girl approached us with fliers of a church program that promised praise, worship, blessings and prophecies. Having nothing else to do, we had attended.

The small building, though left unpainted outside, was adequately furnished on the inside with tiled floors and bright yellow paint on the walls. Blue plastic chairs had been set up for the worshippers, and on the right side of the altar stood a large wooden one for the pastor. We got seated, and minutes later the service was in full swing. The choir came on and for what felt like hours we sang, danced and prayed, none of which I fully participated in because I was too taken by a certain girl in the choir. Neither had Amara, but she instead was fixated on the tall, bearded, handsome pastor who commanded the altar in the same manner a master thespian would command the stage. When he began his sermon, he spoke so amazingly that he had the captivated congregation hanging on to his every word. So, it was no wonder that after the service ended and we were approached with the offer of becoming members, our answer was an enthusiastic “Yes.” And so names and phone numbers were given and Amara and I said goodbye.

“Amara! Amara! Amara! What did I tell you and your brother about attending other churches?” I heard Mummy ask and Amara visibly shrinked further into herself.

“Tell me what happened,” Mummy demanded and Amara began the story with how she had received a call from a sultry-voiced usher who invited her for another program the church was organizing; how she had dressed up and left; how the pastor preached as if the sermon was for her alone; how he had asked the new members to see him after the service; how in his small crowded office, he had fed her the cliché prophecy of graduating with first class honours and finding a good husband. Then he had told her of the mustard seed; how though small, it grows into a mighty tree, and that she too had to sew a seed in the vineyard of the Lord.

When Amara told Mummy that she given the smooth-talking pastor the money Daddy gave her for our school fees in the name of a faith seed, Mummy began to wail. How could Amara be so gullible? There was a mild scuffle on the phone and Daddy’s booming voice filled the room as he began his own round of tongue-lashing Amara who has burst into tears.

“Silly girl, do you know how hard I worked to make that money?” he spat out, “all you know is how to throw it away.”

It was some time before he calmed down and spoke in coherent sentences. “This shows that you can’t be trusted with money. You’re lucky I have some money reserved to get you out of this terrible experience.” 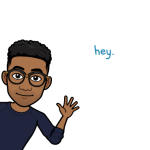 The shade of my existence is but a quasi literary cry for help. Or love, whichever comes first. I’m not picky.

What A Confused Feeling