This morning I was given more than the amount of drugs I used to take. I think I’m the only one close to normal here, I’m fine, I’m sane, they don’t believe, the doctors call me a destroyer. I beat patients up, especially the ones whispering about me among themselves or the ones staring at me.

It’s just so funny that in a mental home, not everyone is crazy. The guy I beat up yesterday, is normal; he’s just battling with depression and he has so many cuts because he cuts himself. The security standing beside the cafeteria door, I held his red hair and punched his nose so hard it broke, all because he pushed me forward.

I used to get angry a lot before I got here, but Stacie my girlfriend had helped me, she would tell me not to get angry at the little thing people do. She would hold me back from fighting and kiss me when the argument was getting heated.

But now she’s gone and she’s never coming back. My life is so empty. She was the most beautiful girl and my most precious treasure.

If only Dani listened to us, if only. His thoughts were cut short, and he fumed with with anger, raising his voice at a nurse and the guard. He was about to punch the nurse, but he got zapped from behind. It weakend him. He knew every time he let his anger take hold of him, he would get strapped to the bed and spend hours being bound and would not be able to move a muscle.

He had already given up on begging the doctors not to strap him; now that he was alone, he felt tears welling up at the corner of his eyes. There was no way he’d be able to fight them , so he let them fall freely. 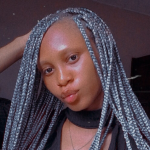