“The States is always lovely.” Maureen smiled at the older woman.

“I love it,” the older said again. A broader smile lit Maureen’s face again at the older woman’s attempt in trying to speak English.

“You know… momma, you can speak Igbo.”

“No, I wouldn’t.” She squeezed her face in disgust. “Here requires more than that, please,” she concluded facing her daughter.

“Momma, you never change,” Maureen laughed out. Unoma looked on at her daughter and didn’t respond. The words were already formed, but she couldn’t tell why it wasn’t coordinated out of her buccal cavity. She watched her daughter laugh.

“This way, mum,” she heard her daughter’s voice behind and stopped. “This way,” Maureen said again closer now. Unoma followed her daughter, and they walked sideways with each other.

The day was finally here. Unoma couldn’t believe it though she said it more often than anything. But now, the reality was just too much for her to take in. Where was her mother, sisters, brothers, especially her
younger brother? Where are they now? She would love to see them on her return, tell them tales about the white man’s land. Tell them about the journey in the massive bird technology. She would describe the streets for them, tell them about the numerous tiny mirror that monitored everyone. She wouldn’t let any stone go unturned. She would also give them gifts upon her return. They were foolish to have doubted her, how couldn’t they believe? Was it hard having faith? She’d dreamt it, prayed for it, longed
for it, hoped earnestly for it, giving in all her faith. And the reality is here finally. She could breathe it, feel it, see it, and hopefully touch it. 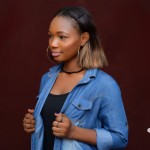 Song of a Sadist