I have been imagining talking to my crush, Court, all year long. I have imagined loads of scenes where I was talking to him. Scenes where I would be too shy or too confident, but both of which he would still love me all the same. But I did not imagine that I would have to talk to him so soon. Today. I imagined it would be when I joined the choir and became a chorister like him, but this I had been procrastinating.

So today he was not ministering, so he was in the congregation, sitting right next to me. I could ignore him throughout the service but I know I would have to talk to him: at a point our pastor would tell us to welcome our neighbours. It would be a very short encounter—five seconds, at most—but it would be monumental to me. It would be the first time ever I would be talking to him.

We were clapping and sitting down now after the Praise and Worship session (a session where I had been very stiff so Court would not think I danced in an undignified fashion.) A pastor was giving announcements but I could not fully concentrate. Court was too much of a distraction. I checked my phone, biding my time, as if I knew the exact time I would have to speak to him.

But immediately after offerings were taken, which was after Testimony Time, he left.

I had a poignant bittersweet feeling as I stared at our pastor telling us to “make more noise for Jesus!” I was grateful because I would listen to the message with rapt attention. I was sad because I did not get the opportunity to speak to him.

Crushes can be torturous. I screamed to the glory of God. 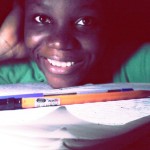 A bibliophile and a writer.

The Evil Between Your Legs

Interview with the New Guy in Town (Mr Corona)