I sat on my old foam in the single room apartment where I stayed, listening to her tale of woes. It has been a quiet evening until she came. She sat opposite me on the only chair in my room with tears streaming down her cheeks. Her eyes were swollen and redder than blood, dark circles were round them, her braided hair had lost some strands and the aura round her was of bitterness.

I feared that soon her problems won’t be the only one at the moment because the old chair creaked whenever she bends her head, and supports her face with both palms while shaking her ‘crossed-legs’. Perhaps, it helps her to hold the tears.

“Buchi, you need to leave that monster, he will definitely kill you with the way he uses you as his punching bag,” I said.

“God forbid! He will repent. God will make him to. I know he will. Besides, I cannot leave him. What will happen to my daughters?” she replied.

“I can help you!” I said, wondering if the God she so much believed in was deaf to her persistent prayers.

“Thank you nne. Don’t worry, he will stop. He wasn’t like this when I married him,” she said trying to force a smile.

Buchi lived down the street with her husband and it wasn’t the first time she was complaining about his beatings. We became friends the day we met at the market. She bought ugu vegetables only to discover that she had lost her money. I saw her standing there and helped her out and we clicked.

The husband sold boxers and okirika (second-hand) shorts at Abakpa Market while she has a kiosk in front of their public compound where she sold pure water, cigarettes, sweets, biscuits and other little things. She also sells fruits that are in season and roasts corn in its season too.

Her two daughters, Ebere and Chiazo helped her to hawk some of the goods especially during the holidays. I was against this from the onset because of the risks involved but I couldn’t stop them.

The last time I argued with her about her sending little girls of seven and ten to hawk,she burst into tears and said,’Can’t you see that I have no option,they have to eat and go to school too’, and I realised how difficult it must have been for her.

It was worse that the shameless husband wasn’t helping matters. He had stopped providing for them with the excuse that he cannot be fending for ‘useless girls’.

“I’m leaving now,” she said, bringing me back from my reverie.

“OK, let me see you off,” I replied and got up from my foam. I didn’t realise how far I had drifted till she spoke. I didn’t even know she has stopped crying.

We left the room together and I locked my door behind us.

“I hope he doesn’t come home drunk again today,” she murmured. I looked at her and sighed battling within me to find the right words to tell her.

Soon we got to her compound. I bade her farewell and walked slowly to my house with many thoughts on my mind. At 35, I wasn’t married and I’m probably among the old maid category which I didn’t give a damn about. Though I didn’t have much, I was happy with the little I earned as a typist in a cyber cafe near the market and it did put food on my table. On some days when I get really lonely and sad, I think of her. Marriage will come when ‘husband material’ comes, I consoled myself.

That night I couldn’t sleep. I tossed and turned still thinking about Buchi. I made a mental note to check on her the next morning.

I remembered the first time she opened up about the abuse which started a year ago. It was hard persuading her to open up. And when she did, I felt my heart breaking and a rage which I had never experienced before took over my being. I confronted the husband the next day and it got worse. The worst part of the problem was her, she couldn’t bring herself to leave him.

On the day he raped her after beating her, I begged her to go to court or report to the Human Rights Group, but she wouldn’t hear of it.

She said, “A woman’s body belong to her husband and I shouldn’t have denied him. He did nothing wrong in taking what is rightfully his”.

I shook her and wanted to bring her back to her senses, but her next words stopped me.
“Though he hit me and I was in pains, he is still my husband,”she added.

I continued to think about her until I drifted off. I woke up to heavy bangs on my ant-infested wooden door. I wondered who it could be, and opened it to see Chiazo standing there with balls of tears streaming down her weary face. I knew at that moment that I had lost Buchi. I couldn’t speak for the tears were trying to spill out and my throat was clogged. I hugged the girl and tried to console her.

The bits the daughter could tell me was that the husband came home drunk again. He had started beating the mother immediately she informed him that there was no food in the house when he asked for food early he next morning. He had hit her and she fell down hitting her head on the cement floor. To witness their mother’s death was a trauma for the girls. I made sure to report to the police where the man was put to jail. I helped the girls to recover and they live with me. 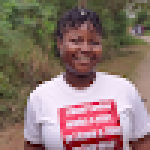 The Shadow of Her Choirmaster